Ready to head back to RI on Sunday, but finished the Florida season with a delightful long run north on the ICW to Ft. Pierce. Wind out of the north at around 12-14 knots, Small Slam danced along effortlessly at 30 knots, pit-a-pat over the small chop. Big grin.

A group including Derecktor Shipyards has taken over an old commercial port area in Fort Pierce to turn into a shipyard to repair megayachts. It is a perfect location, as there is a broad, deep inlet at Ft. Pierce and the water around the new shipyard has already been dredged to 18-25 ft depth. I saw a lot of construction going on and there were two big yachts docked there: 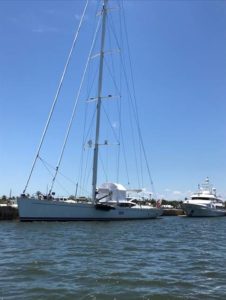 Artemis is a very handsome, large (144’?) sloop, I believe designed by Dubois. Abaft Artemis was a motor yacht – maybe an older Feadship? – named Vixen. Very happy to see a new marine service business starting up in Ft. Pierce, which could use an economic boost.

Also saw one of my old favorites in the ICW, a Marine Trader 44 sedan with the dubious name of “Aargh Matey.” (Sorry about the thumb in upper left). Marine Trader was one of the first companies to build trawler-type boats in Taiwan, founded by a somewhat unpleasant ex-used-car salesman from New Jersey named Don Miller. Marine Traders were designed by a no-name but fairly competent naval architect named Floyd Ayers. Some of the building practices were awful on these boats, and I assume this one has been extensively rebuilt over the years. But I always liked this model – it has a light, spacious main cabin, protected walkways and a couple of decent staterooms in the bow. Usually two small Lehman Ford diesels push it along at eight knots. Not a bad boat for ICW rambling. 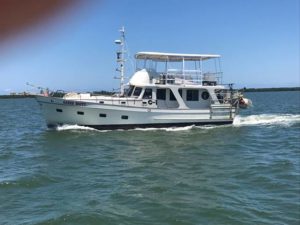 So happy to be on the water.